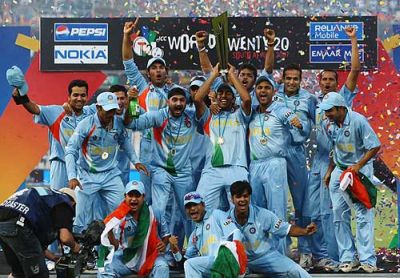 What a wonderful win this has been for India in the inaugural Twenty20 World Cup in South Africa! Left to themselves with nobody caring for them, they have brought the World Cup to our country! A common joke that started floating around after the wins against South Africa and Australia was “Kahin mazak-mazak me cup na le aaye!” And that’s exactly what they have done.

A shot of inspiration had gone through our team once they had beaten Pakistan through Bowl Out. Somehow that bowl out event brought the feeling of togetherness amongst them. It’s my belief that the reason why we see more team-spirit and team-work in Football is because of the Penalty Shootout feature of this game which unites the players with an invisible bond. The Bowl Out in Twenty20 cricket is no different and it was the best thing to happen to Team India during this world cup. Unfortunately though, the chance of occurrence of Bowl Out in Cricket is far less than that of Penalty Shootout in Football.

What had till then had been a normal day eventually turned into a memorable night which I wouldn’t forget for my lifetime.

After returning from college, we had decided to meet at a friend’s place at 5pm. Incidentally, I had not seen a single Twenty20 match on television yet as I don’t have cable at my home. I used to track the scoreboard and running commentary at cricinfo.com for the match against South Africa and Australia. But there was no question of missing the final against Pakistan. My curiosity was higher, what with cheerleaders and music rocking the grounds! Watching the match with friends was the best thing to happen… we were shouting and pumping our fists with each falling wicket. There is another advantage of watching with friends. This match had been such a huge roller-coaster ride that the tension it generated was too much for a single person to handle. With friends, the tension got divided and we were there holding hands, ready to console each other if the worst happened.

Fortunately, it was India who emerged victorious and that final moment of Sreesanth taking the catch will stick to my memory forever. While the ball was in the air, my breath had stuck somewhere between my mouth and nose-pipe. Had he succeeded in getting the cheek shot for a boundary or even a six? How could that unknown young lad have taken the game from our hands? And then as the ball landed in the hands of Sreesanth instead of hitting the boundary, my choked breath released a little too quickly. And then the scene turned euphoric! We were shouting and hugging each other, sharing the moment which summarized the happenings of the past 3 hours! We were dancing on top of the bed, congratulating each other for a win well deserved! Just below, aarti of Ganeshji was taking place. The miracle had happened.

Soon we were zooming on our bikes towards the most happening place in Nagpur: Dharampeth. The square of Laxmi Bhavan was full of people dancing and shouting in chorus. We parked our vehicles and joined them within no time.

This was something I had never experienced before. Everybody’s face carried a smile… everybody seemed to be happy from their heart… It seemed as if no one is anjaan here! More than 4000 people were present at that square itself shouting the hell out of themselves. We came out of the mob as were tired. Standing on the divider, watching the crowd all around me, there came a deep urge to have the person I loved beside me. The mind had risen fully out of all its constraints that had kept me away from that special person… that stopped me to talk to her. I wished to hold her hand… let her share the ecstasy that was pumping through my heart and flowing freely like nectar now. What would I not give to have her beside me? But then, realization hit me with a searing pain. There was no such person.

She was just a little bit more than my figment of imagination and nothing else. How could there be an end to something which doesn’t have a start? The mind took over and suddenly everything seemed blurred. I rubbed my eyes with the back of my palm. I took out my mobile, did the least that I could do and then joined my friends who had started dancing again with the sandal.

We were out till late in the night. The mob had cleared till 11.30pm. We all had decided to party tonight and spend the night at the same friend’s house… basically to complete our practical work. And that’s what we did too! It had been a remarkable day for me. After all, you don’t get a chance to celebrate a world cup triumph every now and then! Lucky are those who witnessed both the triumphs of 1983 as well as of 2007! Long live India! As Sachin rightly put it, “The future is in safe hands.”

What type of Songs would you like to see on AbhiGuitar?